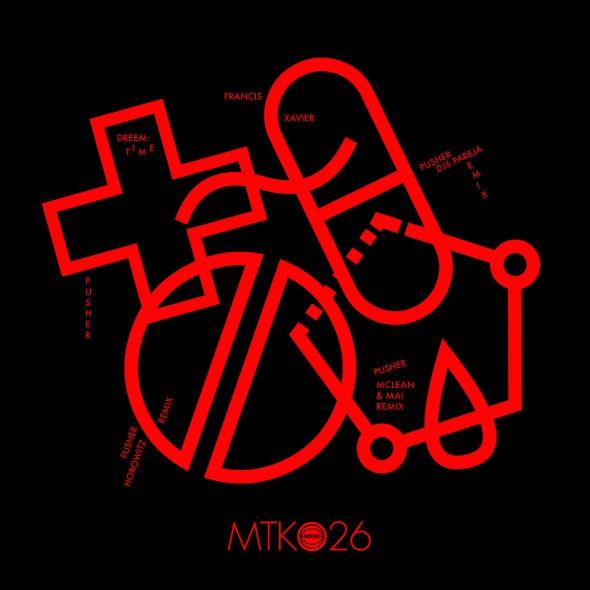 Push it to the limit, push it to the max, push it right until you feel the cracks. Pusher is here from your one and only Francis Xavier, the wizard himself. He’s already launched a live show this year and now he’s whipped up this mean machine for you to mainline into the club. This is Francis as you’ve always known him; heftily analogue, topped with vocals and given enough groove to keep you working at it all. night. long.

Made to choke the room Pusher is droppy but not cheesy, it’s got movement and it’s got sass. It’s a track which will make people run to the dance floor, a track which is hedonistic and altruistic, made for the people in the name of xtc and nrg. Pusher’s vocal sample might make you re-evaluate a few of your life decisions if you listen closely so rest assured it’ll make heads turn. For the DJ scared of vocals fear thee not, there is a dub if that’s what you prefer to rub. For our friends in the biz, there’s a radio edit and a clean edit for the children to listen to.

Dreem:Time lets you breathe, imagine your drive to the beach, your acid trip and finally your day party. There’s a nice analogue warmth to this bad boy, complimented by playful percussion which keeps it light ‘n’ fresh. Made in Sydney’s heatwave climate, Dreem:Time was born in the hot season and you can hear it. The square wave twangs, the tube compressors are burning up, and the vocals loop to a point your eyes are rolling the back of your head, what more could you ask for!?

We’ve brought in some southern friends to complete this package. Buenos Aires’ finest export Djs Pareja fill up that low end giving Pusher the sex appeal it deserves. This is a remix you can actually dance to, we’re not talking the techno shake your body a little. We’re talking bodies movin’ and grindin’ and werkin’ and sweatin’. This is the remix quickly becoming the nu Motorik anthem from the basement to the festival we thank Djs Pareja for giving up some of their precious Cómeme and Turbo time to create this masterpiece.

Label cohort McLean & Mai take a minimal spin on the Pusher. Kissing on Dj tool the M&M remix is made to layer. It’s 4AM and you realised you haven’t played a lyric in 3 hours. This is what you need. While young blood Horowitz is making his debut with Motorik by sprinkling his flavour of acid onto Pusher. Keep on eye on yung Horo this isn’t the last time you’ll be seeing his name with MTK in 2K17. This remix package is a family affair covering all the sub-genres of techno you know.

Francis is no stranger to those familiar with Motorik; he’s the quality control of every record, the gatekeeper of audio production, the encyclopedia of vintage synths, he’s called the wizard for a reason and it can certainly be heard here. Pusher is EP sized in tracks, LP sized in versions, do your ting below and let us know.