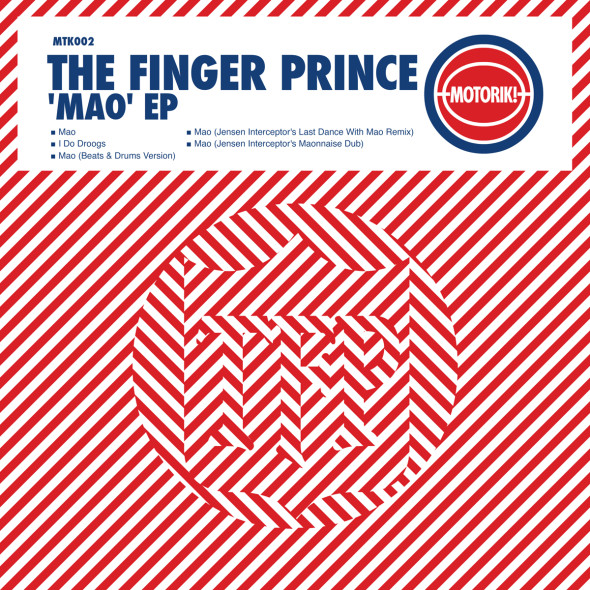 One rave shaman. One silky-haired, silky-fingered titan of analogue sound sculpture. One studio, above a pub, somewhere in the rapidly technofied inner-city of Sydney, Australia. One plate. Lots of synthesizers. What happened? Where are you? Where are we? What is the time? THE TIME IS MAO.

Motorik Records is totes excited to release this monument to k-funk, babes.

Who are The Finger Prince? To their mothers and brothers, they are Angus Gruzman and Frank Xavier. Formerly known as Angus Thee Hoodrat and Frank Xavier (Infusion). At one point or another, they’ve gotten their hands on the lion’s share of the beats, babes, cash and awards that this amazing country has to offer for those into techno. Knighthoods for services to dance music surely beckon, when their hair is greyer and brushing on their zimmer frames – but in the meantime, they’ve busied themselves writing a series of ketafunk masterpieces which have been criminally underappreciated, self-released on Bang Gang Twelveses. Their remixes for ZZT, Azari & III, Black Strobe, Boy 8-Bit, Boys Noize and Erol Alkan are sure-fire dancefloor reckoners, bringers of the apocalypse and all-round party starters. They’re also, respectively, 2/5 of the magic behind Motorik, and have had to excuse themselves from writing this, in order to avoid accusations of favouritism and biography padding.

This EP plays host to a double-pack of remixes from international denim-retailing sensation (and formerly one-half of Light Year), Jensen Interceptor. They both offer something for everyone, from techno djs to people who listen to techno djs – His brand of thickly laid-down fastback funk has never been so accessible on the mainline mix of Mao, whilst the sparse yet driving Maonaisse dub is the choice for those of you on the afterhours scene. His upcoming EP on Motorik will be blah blah amazing blah blah mindblowing blah blah it’s coming out soon.

This EP is, well, it’s something else. Prepare to get wild. The Finger Prince is back.