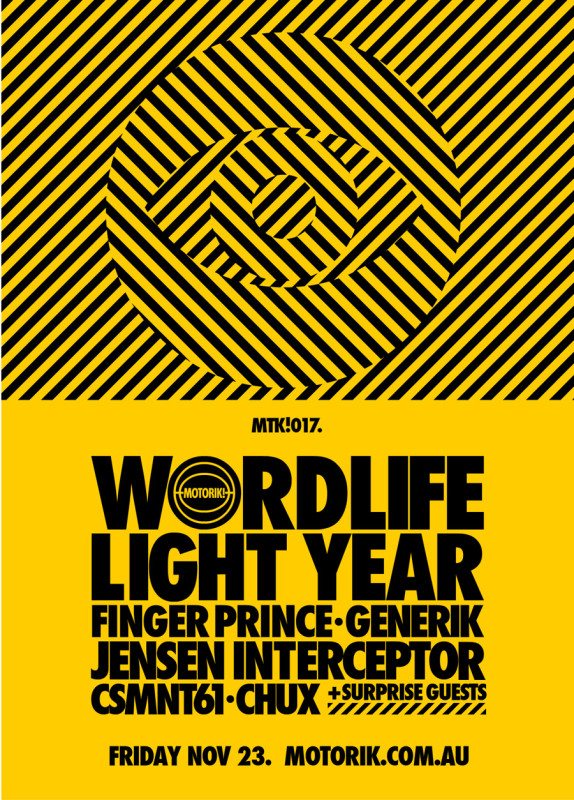 THE BIGGEST MOTORIK EVER.

This is no laughing matter. Cameras ready, prepare to flasssssh. It’s the party to rival all parties, with the biggest lineup we’ve EVER put together, over two rooms and in a secret and freshly revamped venue. All you need to know is that it’s Stereosonic eve, and that this is going to be FANTASTIQUE.

Real talk: Kato and Adam Bozzetto are back from a sold-out U.S. tour and are launching their breakthrough EP, Vision. It’s been played hard on Triple J and in festivals and nightclubs around the world by some of the BIGGEST djs around: Brodinski, Simian Mobile Disco, Sinden, Crookers, AC Slater, Harvard Bass and many more. They’ve DELIVERED. Experience WORDLIFE.

Our next homecoming king: LIGHT YEAR. Back from a world tour and a stint in the studio with none other than Tiga, our boy is back and ready to buck. This is his first Australian show back – and he’s got so many epic jawns up his sleeve.

More? Yeah, alright. GENERIK. Man, model, machine. Imported from Melbourne for your listening pleasure. When he’s not slaying girls, he’s slaying dancefloors. And if he’s doing neither of those, he’s on the tour of cool. His last Motorik performance is the stuff of ABSOLUTE LEGENDS. Expect nothing but more of the same.

Aw, shit. More? K. THREE HOURS OF THE FINGER PRINCE. Our rave shamans missed the last Motorik whilst on a Japanese tour, so we decided to take a knee and let them take you on a journey. Get spiritual. Get to the next level. Prince Fingers and Franklin Furter: your guide to better living.

PLUS: minimotorik in the side bar, with Sydney scene-o legend CHUX, denim salesperson of the decade JENSEN INTERCEPTOR and CSMNT61.

PLUS PLUS: WHO KNOWS WHAT SURPRISE GUESTS WE HAVE IN STORE… We can’t say anything right now… But it’s going to be… THE BIGGEST MOTORIK EVER x 2,000,000

PLUS PLUS PLUS: Funktion One sound for maximum raving pleasure.