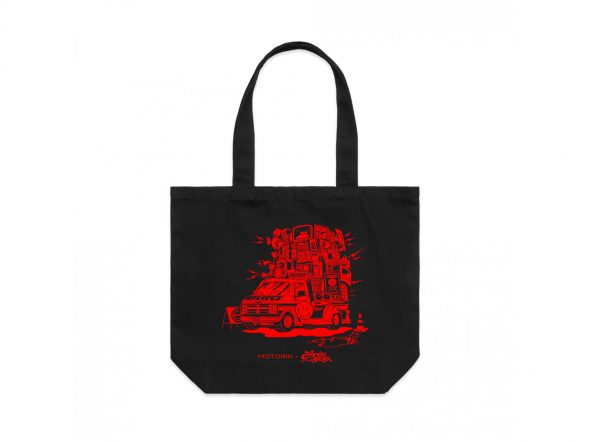 BUY IT ON BANDCAMP

Yeezus has risen to rave us all. Chris Yee is part of the babekühl massive, but a man apart on his own two feet, in an artistic sense. We’re lucky to have him on the mission, but on his solo travails, he’s made an indelible imprint on the collective consciousness around these parts – his fashion capsule collaboration with Song For The Mute and Nothing flew off the selfridges, alongside his officially endorsed™ mural in Sydney’s Tumbalong Park (tru facts: a rave was held there once, and we’d love to make it happen again) as well as a takeover of the galleries victoria for chinese new year, schmearing yee all over the shop. This guy is legit(imate).

Patrick (babekühl mandem, santamaria brother, motorik director of artisanal sourcing) let him loose on a design that’s been recycled (by us) more times than a coke can. Tastefully, though. We used this print on a yellow colourway, and then on the infamous poster of the MTK Underground party that got raided by a journo and caused all sorts of grief for us. We then proceeded to slap it (years later) on the poster of our infamous return to the coalface, which was not raided by any journo, thank fuck. And here we are, celebrating the love of Yeezus. This is a particularly fine edition, unlike any before – a red, rich, rave siren to the sea.

Carry your yoga mat and water bottle around in it – no one will know you spent the night before doing lines and caught an uber home at 5am.

Our new merch is printed digitally using a crack team of israeli ink commandos to inject the MTK XTC NRG right into the fabric. It’s sustainable and durable, both good things to have.