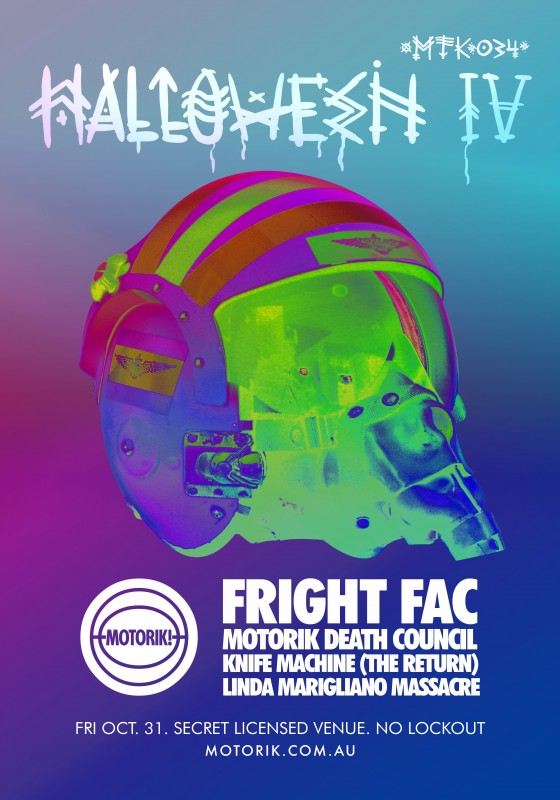 Connect with your spirit animals and rave shamen on this All Hallow’s Eve. Connect with a higher level of dance, trance, blacklight and voodoo. Be one with the spirit of getting wild in fantastic costumes. Spray fake blood everywhere. Be the energy you want to be.

MTK CRU READY: Our headliners are one of Australia’s biggest acts right now. For one night only, they are FRIGHT FAC. We can say no more, except that their origins are shaded by black magic that won’t allow us to call them by their real name. They will unleash a techno spell on you.

MTK CRU STAND UP: The return of none other than the genius behind another band we’re not allowed to name alongside his former Valentinos brother-in-arms from CSMNT61. They’re THE KNIFE MACHINE, and they’re playing live and direkt with an 808.

MTK CRU WE’RE READY: Dripping in fake blood and covered in day-of-the-dead vibes, the unholy alliance of CSMNT61, The Finger Prince and El Presidente Vivi aka THE MOTORIK DEATH COUNCIL. HOCKEY MASKS ON.

MTK CRU THE CHERRY ON TOP: None other than the hottest babe on the radiogram, broadcasting from beyond the grave, THE LINDA MARIGLIANO MASSACRE. Fear her… or dance to her.

We’re coming to you from a secret licensed location, away from the lockouts and booze restrictions. We’re preparing a underground tomb filled with dark energy. SO DARK. SO RAVE. We’re ready to bring HALLOWEEN IV to the undead MTK masses.