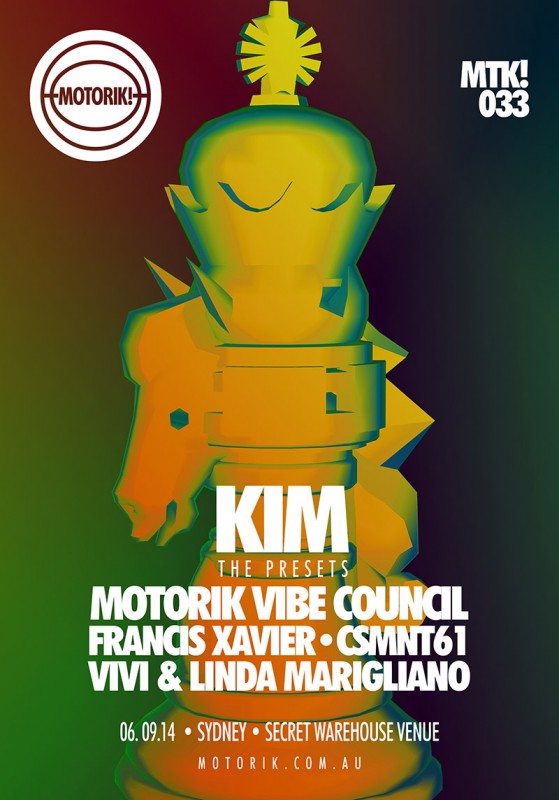 Winter, m8, it’s been real but SOIYA! Spring’s around the corner, so it’s time to get all earthchild spiritual and reunite ourselves with the spirit of MTK XTC NRG.

Leading off the recentering of our chakras, none other than fearless beret-wearin’ drum machine/ARIA-award winning LEGEND OF DANCE – Mr K.I.M aka KIM aka KIM from THE PRESETS. He just dropped a HYDROGEN BOMB of an EP on Motorik Recordings, which has been getting love from some of the world’s premiere rhythmic button-pushers including Maelstrom, Crookers, Anna Lunoe, Sinden and The Rapture. He set a gigantic fire underneath our 3rd birthday rave. He’s back and ready to buck.

It’s no party like an S-Club party, m9, unless it’s an MVC party, in which case, all parties prior are rendered meek and totes useless, because the MVC take party and raving and maximum dance to a new level. The Vibe Council will be in full force this time out.

Looking spooky like in the back babes, none other than the odd couple of Triple Yay’z LINDA MARIGLIANO and Triple K’s VIVI. That back-to-back spastic-funk attack of theirs has garnered fans from chimpan-a to chimpan-z. Fire up your body and get ready to move.

ALL THIS VALUE! ALL THIS POWER! ALL THIS RAVE!
All for the compact price of $24.95 first release, and $29.95 second release.
That flavoursome MTK BYO NRG as usual.
Address released on the night.
Strictly limited allocations available, and like the papers say: STAY PLUR.

love and laughter,
the vibe council